Articles
Yellowstones most Famous wolf killed in the Wyoming Wolf Hunt.
Previous
Next

832F, also known as the 06 female,Yellowstone National Park, and possibly the wolds most famous wolf is dead. legally shot as part of the state of Wyoming’s wolf hunting season when the pack wandered out of the safety of the park. She was killed on 6th December 2012, in the Clark’s Fork Drainage area in Northwest Wyoming, 15 miles from the park and in a similar area to where 754M, a large male wolf was shot.

She came from an impressive lineage. Daughter of the former Agate Creek alpha male, the huge 113M and grand daughter of the Legendary Druid Peak alphas 21M and 42F ( Wolves are given identification numbers when they are fitted with a radio collar with the suffix M for male and F for female). She had joined two brothers 754M and 755M to form the Lamar Canyon pack and become its alpha female. She was a great favorite with the wolf watchers because she was a little different. Normally the males are the best hunters in the pack. But in the Lamar Canyon Pack the had a mighty huntress,her great size and strength, inherited from her father, made her the best hunter. She could bring down large prey on her own and was seen doing so on numerous occasions.

Freelance photographer Doug Breakwell says I have fond memories of this wolf.I was in Yellowstone when she was fitted with her GPS radio collar and watch with mild amusement as the park biologists kept an inquisitive herd of bison away from two sedated wolves while they were waiting for them to come round. I also had a close encounter with her after I climbed up to a saddle half way up Druid Peak to photograph her and her pack.She stared straight at me, which was a little unnerving to put it mildly, but it was a look of curiosity combined with what you looking at?”

Her death brings to a close wolf hunting season in that part of Wyoming as the quota has been filled with 8 wolves . So far this season, at least 87 wolves were shot in Montana, 120 were shot or trapped in Idaho and 58 were shot in Wyoming.

Biologists say more than 80 wolves are still living in Yellowstone, a healthy population from the standpoint of species preservation. But that that number is likely to drop as hunting and trapping continue outside the park.

Not all mourn her passing.Gary Marbut, president of the Montana Shooting Sports Association, likened the admiration for 832F to romanticizing “a psychotic predator stalking Central Park and slitting the throats of unwary visitors.” 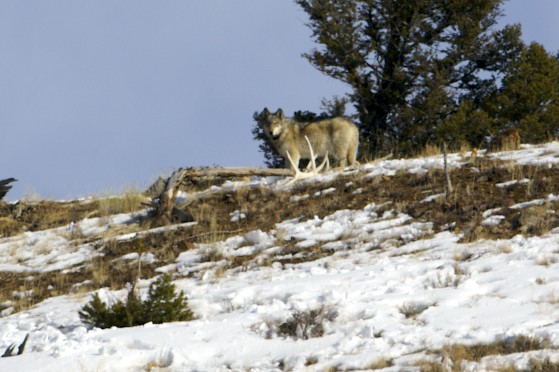