Act 3 Scene 1
Falstaff is alone outside the Garter Inn, musing on his fate. He is a noble knight, yet has been humiliated. He is growing too fat, and his beard is turning grey. He orders a glass of mulled wine, which brightens his outlook.
Mistress Quickly enters, much to Falstaff 's displeasure. She begs his forgiveness, and claims that Alice did not mean for any of it to happen. She hands him a letter from Alice, asking him to meet her in Windsor Park at midnight, in disguise as Herne, the Black Hunter.
Alice relates the myth of the Black Hunter to Nannetta, Ford too is looking forword to seeing Falstaff humiliated, but Alice admonishes him for not believing in her virtue. He begs forgiveness.
Alice appoints Nannetta as Queen of the Fairies, dressed in white with a crown of roses. Meg will be a nymph dressed in green, and Quickly a witch. The villagers will ploy elves, imps, and sprites, and together they will torment Falsataff before revealing themselves before down.
Ford tells Doctor Cajus he will still marry Nannetta. He will bless them as bride and groom; Nannetta will be dressed in white with a veil, and Cajus will be disguised in a monk's robe. Quickly overhears their plan.
Act 3 Scene 2
Fenton is alone in the forest, and sings about love. Nannetta joins him. Alice interrupts them, urging Fenton to put on a monostic robe and mosk, in order that they might turn Ford's scheme against him.
Falstaff arrives at the stroke of midnight. Alice approoches him and he declores his love once more. Alice warns that Meg is nearby, but Falstaff is undeterred, considering this "double the adventure"! But Meg reports that the wiiches are approoching. Falstaff lies face down, fearing that to look on the foiries is deadly.
Nannetta sings the song of the fairies, and then fhe others orrive, in disguise. They discover Falstaff lying on lhe ground, and torment him. Folstoff cries for mercy. The women sing o hymn entreoting heaven to chasten him, but Falstaff adds the coveat that his belly be saved.
The tormenls continue, but then Falstaff recognises Bardolfo and is furious. Alice unmasks, and introduces Ford as her husband: not Fontana as Falstaff thought. Mistress Quickly in turn reveals her identity, and Falstaff acknowledges that he has been made a fool of.
Ford proposes to end the evening's entertainment with the betrothal of the Queen of the Fairies. A couple approach, one dressed in white with o crown of roses, the other dressed as a monk. Alice introduces onother couple who also wish for Ford's blessing. He blesses the union of both couples, and bids them cast off their disguises. He is furious to discover lhe second couple to be Fenton and Nannetta, and Doctor Cajus is mortified to discover he has married none other thon Bardolfo.
Falstaff, Ford, and Cajus argue over who is now the fool - to which Alice replies "tutti e tre" - all three. Ford forgives his daughter, and Falstaff calls for a chorus to round off the scene. Ford proposes they all go to dinner at Falstaff's house. The final fugue sums up the message: 'All the world's a ioke. Man was born a jester... Everyone's fooled! Every mortal being laughs at every other, but he who laughs last laughs best."
Back 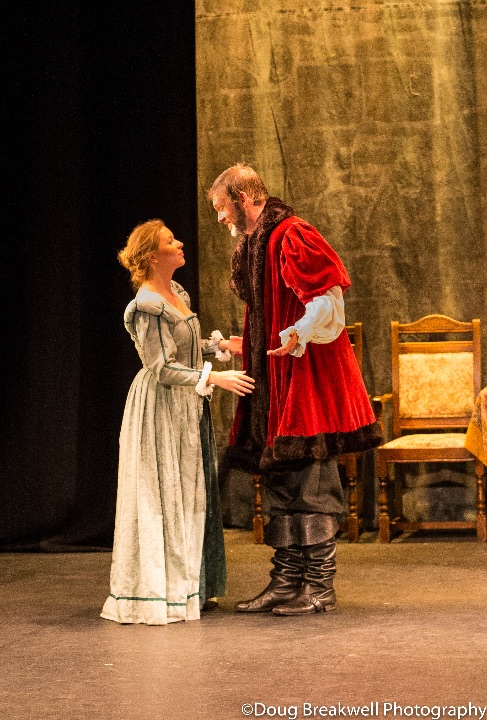