Act 2 Scene I
At the Garter Inn. Bardolfo ond Pistola reingratiote themselves with Falstaff and introduce Mistress Quickly, who wishes to speak to him. She tells him that Alice is quite distracted with love for him; she has received his letter and reports that her husbond is always out beiween two ond three. Quickly also informs him that Meg too hos fallen for his charms, but sadly her husband is seldom absent from home.
Sir John is delighted with his success, and praises his corpulent form for moking him irresistable.
Bardolfo and Pistola return and inform Falstaff thot a "Mr Fontana" (Ford under a false aome) wishes to speok with him and has brought some Cypriot wine as a gift. Fontana explains to Falstaff thot he is an exceptionally wealthy man, and would welcome the knight's assistance in spending his fortune which weighs him down. ln return, all he asks is that Falstaff helps him gain the affections of a certain Alice Ford, who is too virtuous and therefore oblivious to his advonces. He feels if Falstaff were to seduce her first, then one mistake might lead to another.
Falstaff accepts the challenge readily and gleefully informs Fontana (Ford) that he is already partway there, as he has arronged a secret meeting with Alice later that day. He leaves to beautify himself in preparation for this meeting.
Left alone, Ford reflects on what he has iust heard. All of his feors are coming true - his wife plans to betray him, and he will be the laughing stock of the whole town. He resolves to have his revenge.
Act 2 Scene 2
A room in Ford's house. Mistress Quickly returns and informs the ladies that Falstaff has fallen for their trap. He will arrive between two and three. They hurry to prepare the room for his arrival since it is already two o'clock.
Nannetta is crying; her fother, Ford, wants her to marry Doctor Cajus against her will. Alice, Meg and Quickly respond emphatically that they will not allow this to happen. They all look forward to a little harmless fun at Sir John's expense.
Falstaff arrives and finds Alice alone playing the lute. He tells her of his love for her, and how he wishes she could be his Lady and he her Lord.
Quickly bursts in, and informs Alice that Meg is approaching in a rush. Meg hurries in, as per their plan, and tells them that Ford is approoching. They try not to laugh as Alice exclaims in mock horror. Mistress Quickly returns, but this time she is quite serious when she says that Ford is approaching with a crowd of neighbours, benf on finding Alice in the oct of betroying him.
They search the house furiously. The ladies usher Falstaff into the laundry basket to hide. Nannetta and Fenton hide togelher behind a screen, awoy from the turmoil in the rest of the house. But Ford and Cajus overheor their kiss and think they hove found Alice ond Falstaff together. They whisk awoy the screen and are astonished to find the two young lovers. Ford is enraged ot his daughter's disobedience.
The men rush awoy, thinking they've seen Falstaff on the staircase. Alice summons the servants, who unceremoniously upend the laundry basket, with Falstaff still inside it, out of the window and into the river.
Back 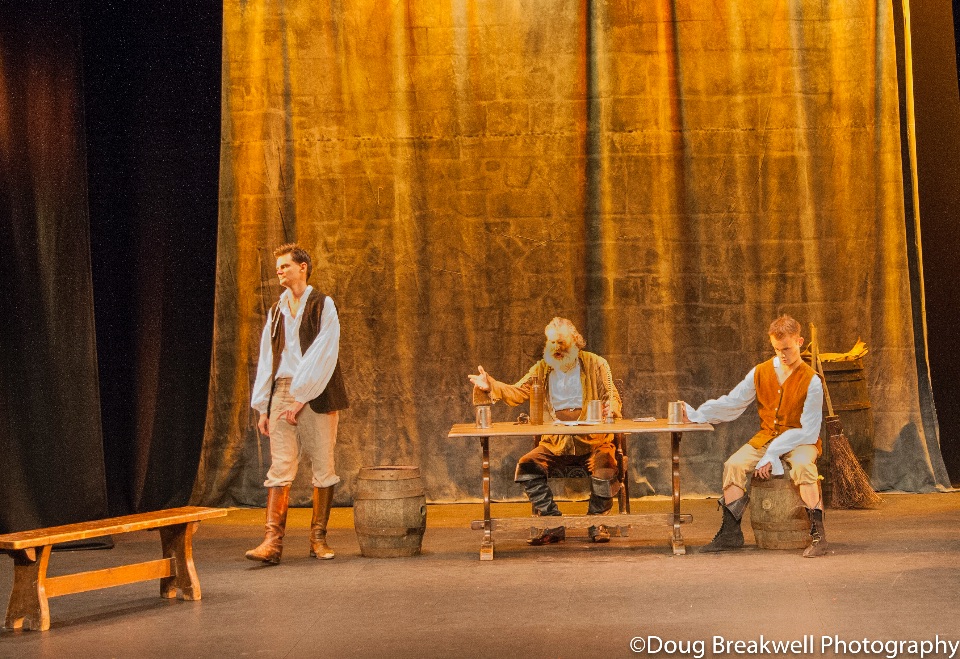